3.4 Interpreters for Languages with Combination

3.5 Interpreters for Languages with Abstraction

3.5   Interpreters for Languages with Abstraction

The Calculator language provides a means of combination through nested call expressions. However, there is no way to define new operators, give names to values, or express general methods of computation. Calculator does not support abstraction in any way. As a result, it is not a particularly powerful or general programming language. We now turn to the task of defining a general programming language that supports abstraction by binding names to values and defining new operations.

Unlike the previous section, which presented a complete interpreter as Python source code, this section takes a descriptive approach. The companion project asks you to implement the ideas presented here by building a fully functional Scheme interpreter.

This section describes the general structure of a Scheme interpreter. Completing that project will produce a working implementation of the interpreter described here.

An interpreter for Scheme can share much of the same structure as the Calculator interpreter. A parser produces an expression that is interpreted by an evaluator. The evaluation function inspects the form of an expression, and for call expressions it calls a function to apply a procedure to some arguments. Much of the difference in evaluators is associated with special forms, user-defined functions, and implementing the environment model of computation.

Parsing. The scheme_reader and scheme_tokens modules from the Calculator interpreter are nearly sufficient to parse any valid Scheme expression. However, it does not yet support quotation or dotted lists. A full Scheme interpreter should be able to parse the following input expression.

Your first task in implementing the Scheme interpreter will be to extend scheme_reader to correctly parse dotted lists and quotation.

Evaluation. Scheme is evaluated one expression at a time. A skeleton implementation of the evaluator is defined in scheme.py of the companion project. Each expression returned from scheme_read is passed to the scheme_eval function, which evaluates an expression expr in the current environment env.

The scheme_eval function evaluates the different forms of expressions in Scheme: primitives, special forms, and call expressions. The form of a combination in Scheme can be determined by inspecting its first element. Each special form has its own evaluation rule. A simplified implementation of scheme_eval appears below. Some error checking and special form handling has been removed in order to focus our discussion. A complete implementation appears in the companion project.

This recursive cycle ends with language primitives. Evaluation has a base case that is evaluating a primitive expression. Some special forms also constitute base cases without recursive calls. Function application has a base case that is applying a primitive procedure. This mutually recursive structure, between an eval function that processes expression forms and an apply function that processes functions and their arguments, constitutes the essence of the evaluation process.

Now that we have described the structure of our Scheme interpreter, we turn to implementing the Frame class that forms environments. Each Frame instance represents an environment in which symbols are bound to values. A frame has a dictionary of bindings, as well as a parent frame that is None for the global frame.

Bindings are not accessed directly, but instead through two Frame methods: lookup and define. The first implements the look-up procedure of the environment model of computation described in Chapter 1. A symbol is matched against the bindings of the current frame. If it is found, the value to which it is bound is returned. If it is not found, look-up proceeds to the parent frame. On the other hand, the define method always binds a symbol to a value in the current frame.

The implementation of lookup and the use of define are left as exercises. As an illustration of their use, consider the following example Scheme program:

The first input expression is a define special form, evaluated by the do_define_form Python function. Defining a function has several steps:

The second input is a call expression. The procedure passed to scheme_apply is the LambdaProcedure just created and bound to the symbol factorial. The args passed is a one-element Scheme list (5). To apply the procedure, a new frame is created that extends the global frame (the parent environment of the factorial procedure). In this frame, the symbol n is bound to the value 5. Then, the body of factorial is evaluated in that environment, and its value is returned.

In thinking about a program that evaluates Scheme expressions, an analogy might be helpful. One operational view of the meaning of a program is that a program is a description of an abstract machine. For example, consider again this procedure to compute factorials:

We could express an equivalent program in Python as well, using a conditional expression. 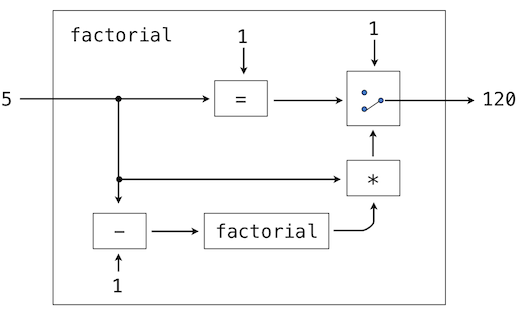 In a similar way, we can regard the Scheme interpreter as a very special machine that takes as input a description of a machine. Given this input, the interpreter configures itself to emulate the machine described. For example, if we feed our evaluator the definition of factorial the evaluator will be able to compute factorials.

That the user's programs are the interpreter's data need not be a source of confusion. In fact, it is sometimes convenient to ignore this distinction, and to give the user the ability to explicitly evaluate a data object as an expression. In Scheme, we use this facility whenever employing the run procedure. Similar functions exist in Python: the eval function will evaluate a Python expression and the exec function will execute a Python statement. Thus,

both return the same result. Evaluating expressions that are constructed as a part of execution is a common and powerful feature in dynamic programming languages. In few languages is this practice as common as in Scheme, but the ability to construct and evaluate expressions during the course of execution of a program can prove to be a valuable tool for any programmer.